First things first: My thoughts go out to the families of those whose lives were taken in University City by the crashed F-18. My thoughts are also with the young pilot who surely did not mean for this to happen and made all efforts to steer the plane clear of civilians before he had to eject.

I find it slightly amusing that Ford announced Monday evening that it would not seek short-term financial aid claiming that they were not in the dire circumstances that GM and Chrysler were in. And yet, just one week ago, they were proposing that they wanted $9 billion dollars just in case they needed it. $9 billion! That, after all the PR nonsense with the CEO driving a hybrid to the hearings and publicly stating that if Ford ever had to tap into the money they were asking for, he’d reduce his salary from $21 million a year, to $1 per year. Was the potential for tapping into that requested $9 billion too tempting? Was the thought of really only making $1 a year too much for the man?

So now we wait as the bill to loan $15 billion to GM and Chrysler gets ironed out. And from that bill, a new power will emerge: The Dictator of Detroit?  The Monarch of Motown? No! It’s THE CAR CZAR! According to the draft bill, the Car Czar “would be required to develop benchmarks for assessing the automakers’ progress in carrying out the restructuring plans. The car czar would also have the power to convene meetings of an array of interested parties in the auto companies, including unions, creditors, suppliers, auto dealers and shareholders.” (Does the Bill actually use the term “Car Czar? I sure hope not. I much prefer Financial Viability Advisor, a title the White House had earlier proposed).Basically, said czar would be in charge of making sure the car companies use the money they’re going to be given to get their asses in gear, to start making themselves viable, and not to divvy up huge bonuses to executives and go flying around the world on private jets. In fact the bill specifically states that the “loan recipients” will not be able to own or lease private aircraft.

So it sounds like our elected and appointed officials are taking this issue as serious as we all can hope. Republican leader, Senator Mitch McConnell of Kentucky commented on some of his (and other’s concerns) with the bill, “As we consider new legislation this week, we must first ensure that we do no harm to taxpayers later in our efforts to help any one particular industry now. Troubled automakers cannot expect taxpayer help without a serious commitment to change their ways – permanently.” And now, like everything that is happening in our economy, all most of us can do is just wait and see what happens next.

Speaking of waiting, San Diego and Tijuana commuters will continue to wait for hours in their cars to cross the border, for at least 5 more years until the recently announced construction of a new international border crossing at Otay Mesa is complete. According to the Governator, delays at the two border crossings have resulted in millions of dollars lost and thousands of jobs. “Everybody benefits,” he said. “This is a huge victory economically and for the environment.” The environment Arnie? Really snuck that one in there, huh? They’re claiming the air quality in region will improve, which makes sense, but I don’t know if I’d go as far to say it’s a huge victory for the environment.

Caltrans will be building the 2.1 mile toll road for $800 million and most, if not all of the money will be raised through toll fees. Now, I don’t know about you all, but I can definitely wait 5 years in hopes that the Tijuana drug cartel-related murdering, rape, and robberies simmer down before I need to get over the border quickly. But the governor’s got me wondering now if the environment can wait that long?

Amidst a downtown riddled with vacant residences, a city facing record amounts of foreclosures and short sales, a country whose citizens are losing their jobs and minding every penny they have, the Hilton Hotels Corporation opened the Hilton San Diego Bayfront on Monday. I don’t know much about the hotel business, and I’m certain that plans for this were well underway long before anyone made a guess that our economy could reach its current state, but we can at least briefly bask in the irony of having to open up a lavish 30-story 1190-room 13-acre hotel in this god-awful economy, can’t we? 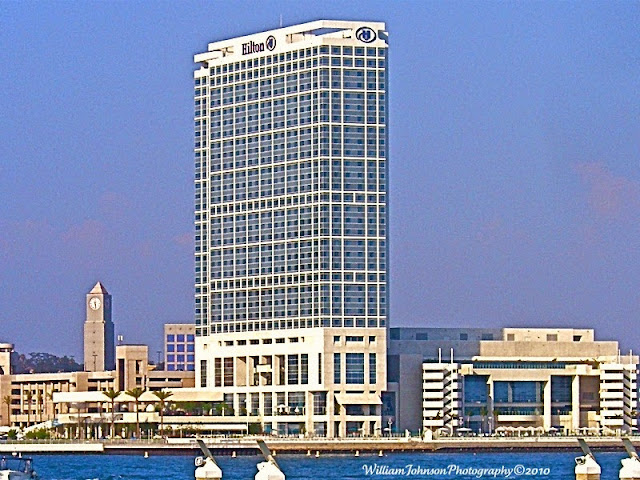 And I quote Jeff Diskin, senior vice president of Hilton Brand Management, “The Hilton Bayfront combines a dynamic waterfront location with San Diego’s coastal lifestyle to create”….this is my favorite…. “…a casually sophisticated vibe that will have wide appeal to both guests and locals.” Well it is appealing. Especially the fact that this hotel is home to San Diego’s first saltwater hotel swimming pool (is that really that appealing?), but being able to partake in such a casually sophisticated vibe as Mr. Diskin describes can’t be inexpensive.  I have nothing against the Hilton Hotels. In fact I would very much like to stay at this Hilton, to use their 7300 square foot health club and spa, to dine at their signature restaurants, and gaze at the $2 million art collection throughout the halls and lobbies. But unless my company’s springing for the bill, I’ll just go for a dip in the ocean and grab a casually sophisticated burrito at Robertos.

4 thoughts on “A Topical Skewer:”