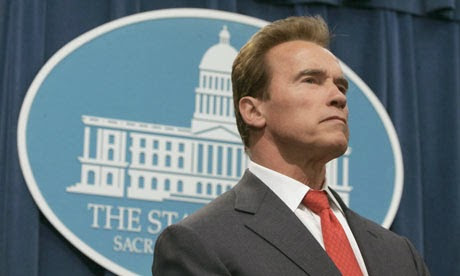 Did anyone hear the State of the State address that Governor Schwarzenegger gave on Thursday morning? I’m willing to bet that not too many people were in a position to turn on the radio or TV to hear what he had to say. Well, if you weren’t able to listen in, I can assure you, you didn’t miss a thing. In fact, it seemed like the speech was purposely held at a time when few people could listen. Why? Because he spoke for ten minutes and simply reiterated the need for the legislators and he to work out the state budget as soon as possible.

I’m starting to feel a little sorry for Arnold Schwarzenegger. He had come to office as the governor of California with a great vision for this state. His dedication to education, healthcare, prison-reform, and the environment was lauded by citizens and governments across the country. And now, as the delay of passing a state budget continues, he is being forced to make decisions that go against his original vision in order to put money back in the state’s pocket.

Evan Halper of the Los Angeles Times discussed how this budget deficit has forced Arnold to reevaluate his visions of grandeur for the state of California. “At the same time he is pushing a $14-billion expansion of healthcare to nearly all Californians, his budget calls for a rollback of existing medical programs for the needy. His hope for improving schools may be dashed by what he says is a need, for the first time in years, to cut by hundreds of dollars the amount spent on each student. And an expansion of the prison system he hoped to reform is now eclipsed by his proposal to release tens of thousands of inmates and lay off prison guards. Schwarzenegger’s budget recommendations put into stark contrast the disparity between his vision of what the state can accomplish and what it can afford in the current economy—especially, say state finance experts, if he sticks to his promise not to raise taxes”. I don’t want to pay more taxes than I need to, but I will happily give more in taxes if it will help get our state’s economy back above water. The Governor continues to preach the need for everyone to make sacrifices in order to get our state’s economy back on track. But in my opinion, the billions of dollars he has proposed cutting from education and health services is a far more detrimental sacrifice than taxing citizens a little extra for the next few years.

Determined not to raise taxes, Arnie’s proposed a few “fees” to be tacked on to certain things, but if you ask me, a fees damn near the same thing as a tax, isn’t it? The proposal is for a surcharge averaging $10 a year property-insurance policies of millions of Californians in order to pay for fire protection. Also, his proposed $11 increase in vehicle registration fees to fund the Department of Motor Vehicles and the California Highway Patrol. Can’t you hear the Gov’s Austrian accent saying, “Dees are naught taxes, dey are fees”? It’s all semantics I tell you. I’m not saying that a tax increase will solve the deficit problems, but I’m quite certain the tax-increase issue remains one of the main reasons for the budget stalemate.

And remember when times were good, and Arnold made us all proud by passing a landmark bill to reduce emissions? That was the environmentally friendly, humanitarian Arnold we came to know and love. That was his vision as Governor at work, doing what was best for us. But now? Poor Arnold is considering licensing more offshore oil drilling in order to collect fees for revenue. He is also proposing to close 48 state parks, beaches, reserves and recreation areas, which will knock off a measly $14.3 million of the deficit. Our state’s budget may be in turmoil, but don’t take away the places we go to recreate and enjoy ourselves!

I’ll be the first to tell you that I don’t know a thing or two about a thing or two about the fiscal responsibilities of our state. But when The Governor spoke this morning, I did not hear the same governor who once demanded bipartisanship and better education. I did not hear the man who, just two years ago was showing the country that California was the state leading the charge on sustainable energy and the fight against global warming. Instead, I heard a man who was frustrated to the point of exhaustion. I heard a man who was placing blame on partisanship, and a man who spoke unconvincingly of a need to make sacrifices. You said it yourself Arnold: in order to accomplish the things you want to accomplish as Governor, we need to first alleviate the enormous weight of the state’s deficit. But try not to lose site of what is truly important to you and the people of California in order to make the numbers work. As we head into Martin Luther King Jr. weekend, I’ll leave you with a quote from the Doc himself, “If we are to go forward, we must go back and rediscover those precious values – that all reality hinges on moral foundations and that all reality has spiritual control.” Easier said than done when your 42 billion in the hole, but the Doc had it right nonetheless.

3 thoughts on “I Have a Dream…. That A State Budget Can Finally Be Agreed Upon for Cryin Out Loud”