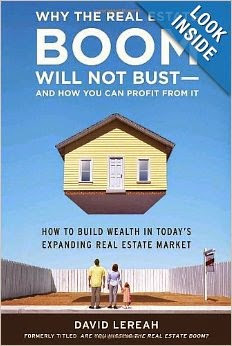 Say it with me: The Chief Economist for the National Association of Realtors. Wow. That is some title. That is the kind of title that warrants respect and admiration. If a person with a title like that wrote a book, I’d be inclined to read it and believe every word. In fact, I recall a book I was inclined to read a few years ago called Why The Real Estate Boom Will Not Bust—And How You Can Profit From It written by non other than the Chief Economist for the National Association of Realtors.It is funny: just a couple weeks ago I saw that book in the storage room of the office and thought, “Ha! I wonder if that guy ever admitted how off the mark he was?”

Well, lo and behold, I got my answer just two days ago. Prashant Gopal, in an article for BusinessWeek.com, wrote that David Lereah, former Chief Economist for the NAR finally admitted he was wrong. “I worked for an association promoting housing, and it was my job to represent their interests,” Lereah said. “If you look at my actual forecasts, the numbers were right in line with most forecasts. The difference was that I put a positive spin on it.” Well, this is no big surprise, but this proves again my point from my blog a few days ago where I discuss the fact that you can’t rely solely on someone else with regards to what you do with your money. You must do your own work researching what’s best for you. Because even a guy with a fancy shmancy title of Chief Economist isn’t looking out for anyone’s interests but his own, and the people he represents.

12 thoughts on “Why The Real Estate Boom Will Not Bust”