It’s happening. The State of California is broke, they can’t balance the damn budget, $4 billion of scheduled state payments are being delayed, people’s lives are being severely affected as a result, and it makes me want to shake somebody! I wish that all the law makers in Sacramento, including the Governator, would form a single file line outside my office door, and one by one I would invite them in so that I could SHAKE THEM. How much more helpless can we feel as citizens? Listen, I think it’s all good and fine that Democratic lawmakers want moderate spending cuts and tax increases, and it’s all good and fine that Republican lawmakers want no new taxes and deep spending cuts, but for the love of all that is good with the state of California, can you not come to a compromise already?! 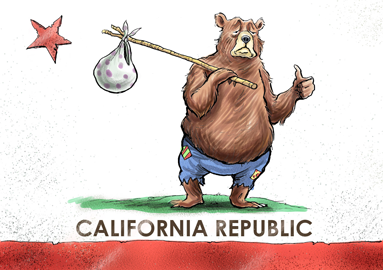 The well publicized $42 billion budget deficit California is projected to reach by mid-2010 is resulting in spending cuts that are turning heads and causing uproars. Just last Thursday Sacramento County Superior Court Judge Patrick Marlette ruled that Governor Schwarzenegger does indeed have the authority to force tens of thousands of state workers to  take days off without pay. According to the Associated Press, “The two-day-a-month furloughs are scheduled to start Feb. 6 and would apply to all 238,000 state workers”. This move will result in the budget being cut down by a whopping $1.4 billion. But cuts like this seem like somewhat reasonable solutions given the emergency circumstances the state is facing. However, it is the stalemate in Sacramento that is now resulting in further hardships for people that depend on the state for a number of financial needs.

Nearly $4 billion of scheduled state payments are being delayed in an effort to prevent the state from running out of cash. Bobby White and Stu Wood of the Wall Street Journal interviewed the Controller John Chiang last week about this delay, which is expected to last 30 days. “I am very concerned about the potentially devastating impact to individuals, to families, to businesses,” he said. But “my principal responsibility at this time is to make sure that California does not go into default.” What a mess. So while the state lawmakers are “trying to hammer out a solution”, there are a lot of people undeservingly getting screwed. Income tax refunds are an expected and depended on stimulus for citizens, and local retailers and businesses. College students won’t be paid their educational grants, and welfare checks will be put on hold. Entire counties and cities, many of whom don’t have much money themselves, will be required to cover the costs of social service programs normally included among the state payments. When it rains it pours and this is a serious storm.

I do not know what goes in to balancing a state budget. If I did, I might be able to provide some concrete examples of how lawmakers might get over this hurdle. Or maybe, if I knew about balancing a state budget I’d understand more fully just how difficult it is to make it work. But we, the citizens of California (more specifically, those of us on the lower end of the tax bracket), are truly paying a hefty price for this budget stalemate. I learned the value of compromise a kid, why are extremely intelligent adults having such a difficult time giving up a little in order to reach a common goal? On family road trips, my brother and I would get into shouting matches over where we should stop for lunch. I wanted McDonald’s because I loved their chicken nuggets and he always wanted Burger King because he liked their burgers better. And boy oh boy, were we stubborn about it. But there were two ways that we handled such situations (or more matter-of-factly, how my parents handled such situations): 1.We would agree that we would stop at McDonald’s on the way there and Burger King on the way back, or 2.We’d go to Wendy’s. And there you have it ladies and gentlemen: A compromise! Chicken nuggets and tax increases, Whoppers, and huge spending cuts, it’s all the same in this, my fast-food metaphor for how to come to a compromise. If only it were that simple right? But, lawmakers of California, does this really need to be as difficult as you are making it? I can’t for the life of me believe that it is.

3 thoughts on “California is Broke!”