As summer approaches…well hell, Memorial Day Weekend was this past weekend so……Now that summer is here, we San Diego residents find ourselves in a formidable “Level 2” drought alert condition. For residents this means that there will be rate hikes on excess water use, limits on outdoor watering, and mandates to promptly repair leaks. But this drought brings to light an ever-increasing problem and the need for a new era of water restrictions and social responsibility.

In 2001, California passed a bill that, according to Hoa Quach the political writer for the San Diego News Network, that “forces developers to show that the Urban Water Management Plan, which is completed in five-year cycles for a 20-year outlook, shows a sufficient amount of water is available for the proposed project.” Much more effective, in my opinion, is the part of the bill that “requires projects over 500 units to create an alternative water supply.” Hoa Quach interviewed Tom Sudberry or Sudberry Properties whose company is developing a 4780 unit multi-use development called Quarry Falls near Qualcomm Stadium. That development, per the requirement of 2001’s senate bill, will have its own water treatment plant. According to Tom Sudberry, “We’ll be able to create about 250,000 gallons of water a day, enough water to irrigate all of the landscaping of the entire project.” In addition, sub-meters will be installed for each unit allowing the tenant to keep tabs on their own water use.

It’s good to see some real solutions being put into action on new developments. But a big step to improving our city’s water conservation would be to require sub-meters to be placed in all new developments. However, according to Marco Sessa, Sudberry VP, “regardless of new buildings having sub-meters or not, older homes use more water than new buildings as older homes may, sometimes have leaks that use a vast [amount] of our H20. One wonders whether more effort should be placed into retro-fitting some of the older homes.” Well Marco, brings up a good point. But in my opinion, more effort should first be put forth towards permanently expanding water restrictions not just to developers, but to everyone, just as they have done now that we’re at a Level 2 Drought Alert. I couldn’t believe how much my condo complex watered the lawns every day until the alert came into action. I like a green lawn as much as the next guy, but no one needs to water their lawn twice a day EVERY DAY!

So, in the spirit of our Level 2 times, I am providing a list, courtesy of Better Homes And Gardens, of things you can do to help reduce the amount of water you use, and to help Southern California face our water shortage head on:

Check all pipes, hoses, and faucets in the house for leaks. According to the American Water Works Association, a dripping tap can waste 5,000 gallons of water in a year.

Check toiliets for leaks. put a little food coloring in the tank. If it appears in the bowl without flushing, it’s leaking and  can waste up to 4,000 gallons of water in a year.

Turn on your dishwasher or washing machine only when it’s full. A dishwasher uses only about 9-12 gallons of water while hand-washing dishes can use up to 20 gallons.

Don’t run the tap when brushing your teeth; use a cup of water to rinse. 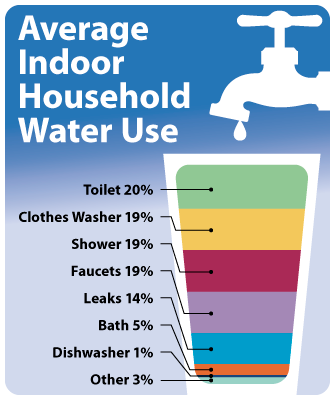 Use a trigger hose when washing the car.

Use a broom to clean your driveway, not your hose.

Consider buying a rain barrel to capture water for shrubs and lawns.

Cover the swimming pool on hot days and at nights as pools can lose up to 50 gallons of  water in a single day through evaporation.

Don’t use your toilet as a disposal unit by flushing a used tissue or other garbage. A single flush can use as much as seven-to-ten gallons of water depending on your resevoir.

Keep a container of drinking water in the fridge. Running the tap to cool water can waste up to three gallons per minute.

8 thoughts on “Hold Onto Your Hoses, It’s a Level 2 Draught Alert!”