As I discussed in the previous blog, there can be issues when a home becomes vacant and no one is around to maintain the property. Any millions of things can happen, but commonly, homes can become infested with insects or rodents, mold and mildew can grow dangerously fast, algae blossoms can overtake un-drained pools, creepy disoriented men can burrow in the living room and may or may not choose to use the toilet when they have to go to the bathroom. Even worse than a vacant home, is an uncompleted home, which is obviously far more exposed to the elements and potential squatters.  Sometimes, banks might figure it’s not worth the cost to maintain and sell unfinished properties; especially if the property is in a depressed area. Instead the homes get demolished. 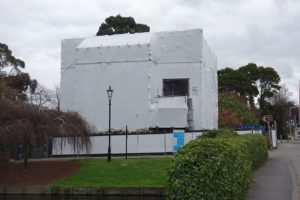 An alternative to demolition has recently come into play from a Reno based company called Fast Wrap who specializes in shrink wrapping large items like boats, sheds, and huge piles of lumber are now doing the same to houses and big condo buildings, Shrink Wrapping Homes. According to Nick Timiraos of the Wall Street Journal who recently wrote an article on Fast Wrap, the shrink wrap “covers the unfinished structure in a thin sheet of plastic, sealing off buildings from exposure to the corroding effects of weather or to keep out unwelcome critters or squatters. ‘It looks like a plastic house,’ franchise operator Mike Enos tells the Real Deal. ‘When we put them in neighborhoods, everybody wants to keep them, not only their kids out of neighboring residences, but anybody else that might come in to steal or salvage, like for copper.'”

Sounds like a hell of an idea. I can’t imagine it’s THAT effective in keeping out a determined squatter with a blade, but for everything else, it might just work great. So far Fast Wrap has been doing jobs in the Northeast. After all, there is more severe weather out there, but I have to imagine if this tactic proves successful, we’ll be seeing similar home wrapping make its way to California soon.