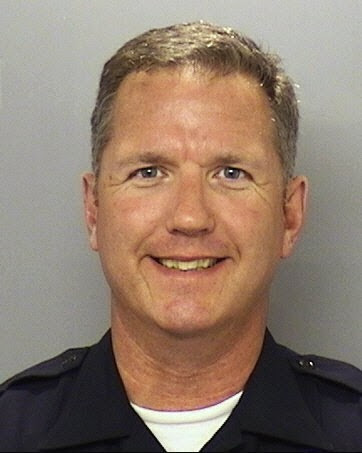 I know this isn’t related to real estate but those who read this blog know that my ADD tends to take me in different directions and today I want to write about San Diego Police Officer Christopher Wilson who was shot and killed last week. I won’t even mention the scumbag who shot him, today was a day to remember Officer Wilson. I never knew Officer Wilson but the support from the community has really been heartwarming.

Officer Wilson was a 17 year veteran of the San Diego Police Department. He worked the roughest part of Southeastern San Diego. He had plenty of opportunities to leave that area, go to a friendlier spot but he always chose to stay. He felt like that was his “Hood” and those were his “Peeps” out there in that community and he felt like he could make more impact working that community. By the showing of his funeral today it was clear that he made an impact.

His funeral procession passed right by our office early this morning with a motorcade of more than 1,000 police cars, motorcycles and firetrucks. The local news said the motorcade stretched more than 12 miles and in some parts the streets were full of people with many stopping to pay tribute and solute the hearse as it passed by. One couple interviewed, said they were visiting from Las Vegas and saw the news early in the morning and felt compelled to come out and pay their respects, her husband was a Police office in Las Vegas. The motorcade ended in Point Loma at the Rock Church where more than 4,000 people attended the service. The governor, Arnold Schwarzenegger attended the service. Police officers from every police force in Southern California and some from thousands of miles away attended. There were even police from Tijuana Mexico which was a nice gesture to see their support.

I don’t have any close family in law enforcement but I do have a friend that works that same area in San Diego. I believe he has been with the SDPD for about 15 years and about 8-9 years ago I went on 3 different ride alongs with him. What is a ride along? Most police departments offer them to the public and I would encourage you to inquire about it. You go out with a local police officer and basically “ride along”. I can tell you one thing, I was a lot younger at the time and probably didn’t have the respect for law enforcement that I should have had. I wasn’t a bad kid or anything, I have never been in trouble but as a kid you think about cops giving you a speeding ticket, breaking up your party and trying to put an end to all your fun. As you grow older and mature a bit which I am still doing 🙂 you realize that the police are the good guys and officer’s like Christopher Wilson give the ultimate sacrifice protecting all of us from the scum of the earth.

Here in San Diego officers have 3 different shifts, early morning to afternoon, early afternoon to late night and late night till early morning (Graveyard). They usually work each shift for 4 months and rotate. My friend would always till me to wait till he was back on graveyard and go out with him on a Friday / Saturday night. San Diego is not a town full of crime but I can tell you that there are some areas here in San Diego that get real nasty around 1-4am on Friday and Saturday’s!!! After spending 3 different nights doing a ride along during the graveyard shift and experiencing / seeing what these guys do on a nightly basis you will gain a WHOLE new respect for these officer’s. That still is my friends favorite area to work and it was Officer Wilson’s. Anyone have the courage to do a ride along in San Diego? Follow this link, if you want some action. My suggestion is to request the graveyard shift in the “Midcity” or “Southeastern” divisions.

As for today’s funeral service, it was nice and it was San Diego offering a goodbye to a really great officer and even better citizen of our city. He leaves behind a 17 year old son and a 20 year old daughter.

Here are a few photos of the service. Photos taken by San Diego Union Tribune photographers.