By now you’ve all heard about the debacle that was San Diego’s 4th of July fireworks show last night, Big Bay Bust. Thousands assembled in prime viewing spots for hours in advance, some even booked hotel rooms overlooking the bay. We were all eagerly awaiting the 20 minute fireworks extravaganza over the bay, a proud annual tradition here in San Diego. 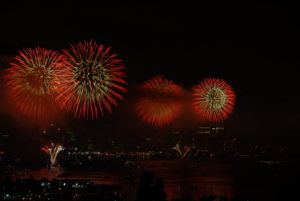 What we got instead was a massive explosion that started 5 minutes early and fizzled out in just 20 seconds. By 9:20pm radio announcements were telling all the confused spectators that the show had been canceled.

Port District authorities blame it on a “technical difficulty” that caused all the fireworks to go off at once. Investigations are ongoing and I’m sure we’ll get a more thorough explanation of what went wrong in the days to come. Pretty disappointing, all things considered.
Big Bay Bust

This year, the San Diego Bay will light up once again for the annual Independence Day celebration, and things are expected to run a bit more smoothly.

The 19th annual pyrotechnic show, which launches Wednesday, July 4 at 9 p.m., is expected to draw over 500,000 viewers to viewpoints all around the bay. You can watch all the action on FOX 5.”