Short answer, heck yeah you should! Get out and make your vote count! 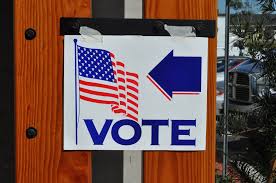 I’m not going to sit her and tell you who you should vote for but I will tell you that you need to go out and vote.

From presidential primaries to local elections, voting in any election provides an important way to voice your opinion regarding different policies & elected leaders. Voting helps you decide your own future by choosing a candidate that might share your own views & opinions. The ability to vote is one of the most cherished Constitutional Rights that many marched for, fought for and died for over the years.

If that right was taken away, the United States would no longer survive as a democratic nation. Don’t give away that right, make sure you use your power to influence the government because your vote does count!

“Voting is a method for a group, such as a meeting or an electorate, in order to make a collective decision or express an opinion usually following discussions, debates or election campaigns. Democracies elect holders of high office by voting. Residents of a place represented by an elected official are called “constituents”, and those constituents who cast a ballot for their chosen candidate are called “voters”. There are different systems for collecting votes.” https://en.wikipedia.org/wiki/Voting

1 thought on “Why you should vote!”