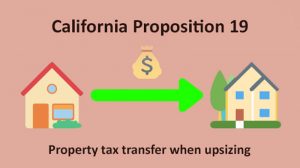 Ballot measure Proposition 19 narrowly passed in California in the 2020 election season, winning with just over 51% of voter support. A concerted two year lobbying effort by the California Association of Realtors has paid off in the end, with Proposition 19 set to become law throughout the State after the successful vote.

What is Proposition 19 And Who Benefits From It?

Proposition 19 is a property tax measure that seeks to reduce the tax burden on homeowners over 55 when they move to a new home. Prior to Prop 19’s passage, older homeowners had a one-time opportunity to keep their existing tax benefits when they downsized (i.e. moved to a home of equal or lesser value) in the same county as their previous property. If they moved to a more expensive home, or moved out-of-county they would not retain any of their existing tax benefits and would have to pay the property tax bill in full.

Proponents of Proposition 19 argue that the measure will stimulate the housing market by encouraging older homeowners to move house without facing a huge tax bill. This can encourage homesales and freeing up inventory for newer, younger homeowners. Furthermore, Proposition 19 isn’t just limited to homeowners over 55. The measure offers the same tax benefits to homeowners with disabilities, as well as to Californians whose homes have been damaged or destroyed by natural disasters, like the recent wildfires.

This is not the first time the California Association of Realtors has tried to pass something like Prop. 19. In 2018 they were unsuccessful in convincing the voting public to pass Proposition 5, a similar initiative that would have offered tax incentives to older homeowners. The likely reason Prop. 19 passed while Prop. 5 failed is due to an additional measure added to the bill: a tax increase for inherited properties.

Prior to the passing of Prop. 9, children/heirs who inherited their parents home and used it as a rental property or as a second home (i.e. beach home or holiday home) benefited from the same property tax breaks their parents enjoyed when they owned the property. This resulted in 650,000 Californians getting tax breaks on their holiday homes or rental properties that were handed down from their parents. Proposition 19 eliminated those tax breaks. From now on heirs who are using their inherited properties as second homes or rental units will have to pay the tax bill for those properties in full.

Proposition 19 Explained In One Sentence