Located just 10 minutes away from downtown San Diego is Kensington, a quaint 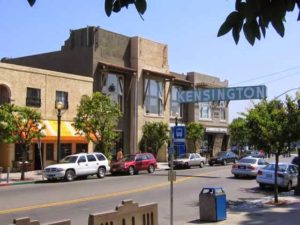 residential community home to some 6,658 people (2010 census). Covering just over 1 square mile, Kensington is bordered by Interstates 15 and 8 in the west and north, El Cajon Blvd in the south and Fairmount Ave in the east. Kensington is closely associated with Talmadge, another residential community in its eastern border. The two communities are grouped into one for city planning purposes.

The first residential units in Kensington started going up in the 1910s when San Diego land developers started buying land in the area. The earliest homes featured a Craftsman style design, which was all the rage at the time. The 1920s saw an influx of Spanish Revival style homes throughout Kensington. Maybe of these early properties still exist today and are a large part of Kensington’s old-world charm.

Today Kensington is an upmarket residential community with many of the charms and quirks of a small town, despite being located a mere 10 minutes drive from downtown San Diego. Withstanding the relentless march of progress and modernization over the years, Kensington has managed to hold on to its reputation as a peaceful enclave of charming old-style homes.